I'm going to try to remedy that, and this will be the first post to do so.

What follows is a short bit of flavor text and then a series of maps.  This is something that I created about two years ago.  The text and maps describe the Rock at Morgus Cray, a location in my campaign world.  The Rock is a rocky peninsula that juts out from a coastline; it is surrounded by columns of stone that are slowly breaking off from the peninsula and crumbling into the sea due to the action of the surf.  A light house sits at its peak.


“The Rock at Morgus Cray was not remarkable in any way; it was like a dozen other peninsulas along the treacherous Iron Coast. But it was midway between Sempus Delve to the north and the wealthy port cities of the Sarsiss to the south.

I was a Mate to Shezzar KiNeel of the Strong Runner, when, on our fourth journey past the rock, we strayed too close. The Runner’s back was broken on the rocks, and she was sinking fast. Although not yet fully confident in the ways of the sea, I was smart, and observant. I made my way to KiNeel’s cabin as he was fighting to save his ship. There, I stole two rings. One, a Ring of the Scaly Deep, granted me waterbreath. The second afforded me protection against the cold waters. Old KiNeel at some point realized that he was going to loose his ship. He found me in his cabin, caught red-handed as it were, but he was too late. The rigors and cold water had taken their toll on him. As the Runner disintegrated on the rocks, I was the only to survive.

While the water and cold could not have killed me, the battering waves would have, if it weren’t for the existence of something that none of us were aware of--something that could not be seen from seaward. There was a channel through the rocks! I followed it, and it was then that I found it. The cavern!

I stayed there for three days, for I was afraid of the power of the waves. It was only hunger that drove me—drove me to explore the inner reaches of the cavern. In the darkness, I could only find my way by touch; I could make no fire. So I probed and climbed, and found a way out, up to the tower on the Rock.

The Seafarer’s Guild had built the string of lighted towers up and down the Iron Coast. The automaton left there should have been able to provide me with some food and water. And it did, as well as dutifully recording my presence in its log. But the tower had not been provisioned in many months, and the automaton did not have much to help me. It was then that I understood the waning power of the Seafarer’s Guild. And a plan began to form in my mind…”

Within days of making this report to the Council, Amshir Dysa was presented with the Black Sigil and thereafter slain. Several members of the Council attribute the veracity of the tale to the fact that Dysa was marked and then killed in Wavern’s typical style. Others, however, do not believe Wavern to be so strategically naïve as to blatantly order a revenge killing based on a report that would be difficult at the time, if not impossible, to verify. 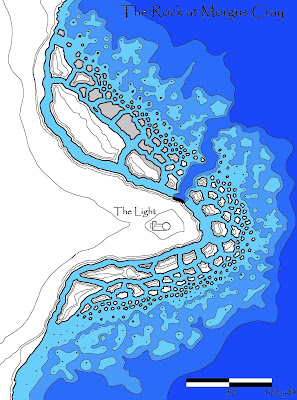 The first map is of the entire peninsula including the lighthouse and surround ocean.  The ocean colors indicate depth contours while the lines on land indicate height contours above the water line. 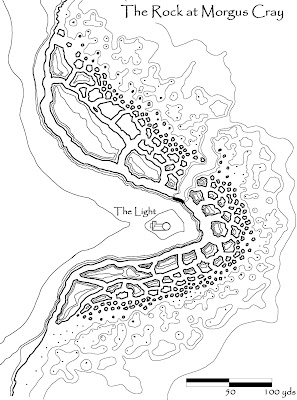 The black and white version of the above. 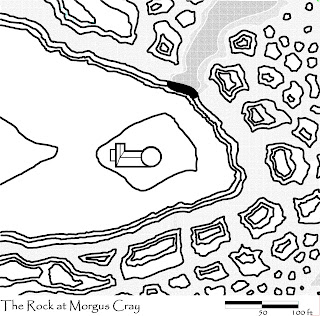 Focused on the end of the peninsula. 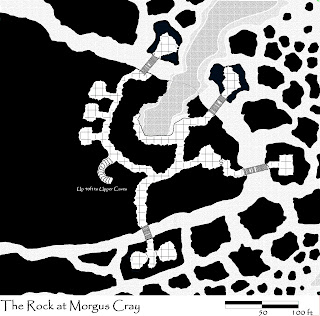 View of the cavern at sea level.  This map also shows that some of the columns have been hollowed out and are linked to the main cave by treacherous rope-and-plank bridges. 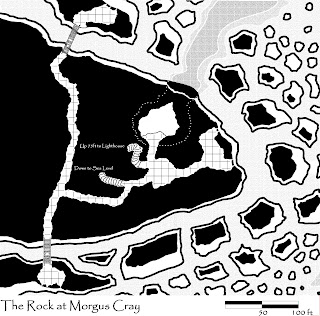 The second level of the sea caves.

So there you have it.  I would love for people to use this location in their own games.  If you do, please drop me a comment.
Posted by Nick at 11:36 PM