As I have been away from the blog for quite some time, it has been awhile since my last Map Roundup.

The first two links that I have for you are sactually a few months old.  Take a look:

Who doesn't occasionally do this?

Now for some posts that are a little more recent:

Here is a Treasure Map that its creator constructed from bits and pieces of illustrated manuscripts.

Here is a nice post about maps and the ways that they can be made better.

And here is a map [with a very distinct (and useful) style] of an underground river.

Take a look at these two dungeon maps from the science-fantasist over at Planet Algol: here and here.

And while this post has nothing to do with maps, it does include an illustration that, to my mind, is one of the iconic 'maps' of D&D.

That's all for today.  Now that I am back in the swing, these Map Roundups should become more common again.

If you happen to see posts regarding maps anywhere in the blogosphere, please email them to me, if I have missed them.  My Roundups will get better if you readers help me with them.  Cheers!
Posted by Nick at 10:38 PM No comments:

So this post will have absolutely NOTHING to do with maps, or fantasy, or even rpgs at all.

In my younger days, in addition to being a player of D&D, I was also a Star Wars fanatic and a huge Schwarzenegger fan.  I suppose that I remain all of those things to this day.

Someone created a video of Darth Vader in Episode IV 'voice-overed' by Arnold.  (To those of you who are offended by the 'verbing' of nouns, I apologize.)  I just had to link to it.

Beware: The language in the video is definitely R-rated.  Watch it here.
Posted by Nick at 3:11 PM No comments:

So this is going to be a bit of a strange post.

I don't want you to purchase them at this point.  For reasons that I discussed a long time ago here, I don't think that these products are worth your money.  Okay, you say--if they're not worth my money, drop the price to make them worth it or remove them from the website or do something other than write a post about them.  Actually I am, but more on that in a moment.  First, the products:

Hand Drawn Maps, Volume 1.  A simple product containing 10 maps of various fantasy locations--a few dungeons, a keep, and a small town.  It contains only maps--no text, no description, nothing but the maps themselves. It first went on sale in January 2008 for $1.50 and has remained that price ever since.  Unlike Locales, Volume 1, which was my first product, HDMV1 did not include any work of my own but was the work of a cartographer who hung out at the Cartographer's Guild who held the moniker Terrainmonkey.  It was my small attempt to highlight the great things that were going on over at the Guild.

Caverns, Tunnels, and Caves: Volume 1.  Another simple product containing 16 maps of--you guessed it--caverns, tunnels, and caves.  No keys, no descriptions, just 16 maps, black and white with a grid.  It first went on sale in February 2008.  Initially on sale for $1.90, it is now selling for $1.25.  What I wanted to do with CTCV1 was include maps of underground areas that looked more 'natural' than typical D&D maps.  As someone who enjoys looking at maps and has done a little bit of caving, I realized that most maps of cavern and cave systems in D&D weren't very realistic.  I was hoping that this would fill a niche in the market.

Caverns, Tunnels, and Caves: Volume 2.  Identical to the first, this time containing 15 maps.  It first went on sale in September 2008.  Initially on sale for $1.75, it is now selling for $1.25.  Same idea as CTCV1.  I am ashamed to admit it, but at the time I wanted to put something out and couldn't find the motivation to do what I should have done, which was work on Locales, Volume 2--something I still haven't done.

So those are the three products.  If you were to purchase all three of them, you would spend $4.00, and for that money, you would receive 41 maps of gameable locations.  What you wouldn't get is any text or description, beyond the titles of the maps in HDMV1.  Worth it?  That depends on you, but I would say probably not.  (Although there are a large number of gamers out there who can be inspired by a decent map and find great utility in standalone maps, why would you spend money for them when there are so many free maps floating around?)  Looking back now, it certainly was not worth it when, instead of $4.00, those products cost you $5.15.

Since I do not feel that these products are worth the $4.00 that I am asking for them, I recommend that you DO NOT purchase them.

What is my point in all of this?  Let me tell you:  I am going to do some things to, hopefully, make them a little more worth your hard-earned money.  I am going to take these 41 maps, spruce them up a bit, combine them into a single document, and put them up for sale.  I'm not sure what price I'm going to charge, but it is going to be something less than $3.00.  Further, I am going to discontinue the sale of the three original products at that same time.  Are those maps worth the small money that I am soon going to charge?  Again, that depends on you, but I think that they just might be.

Last thing.  The new product will be called Basic Maps, and its cover will look like this: 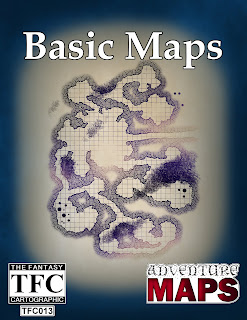 Yes, I'm going to make a third post -- the third in a row -- that includes a link to the Bottom Feeder.

Today, Jeff Vogel wrote a good design post for his next computer game project, Avadon.  I am linking to it, because I think that it contains lots of good ideas for adventure/campaign design.

In the broad spectrum of ways to design a campaign, some people think about and decide every detail in advance, down to the Nth degree.  Others, like James leans toward the other end of the spectrum and, in fact, prefers to learn about his campaign world through play.  Regardless of where on that spectrum an individual DM falls, the post that I link to above has some good thoughts.  I recommend it.

And I'll try to post about something else next time.
Posted by Nick at 8:04 PM No comments:

...who has noticed Jeff Vogel of Spiderweb Design, auther of the Bottom Feeder blog, of which I am a regular reader.

Indeed, apparently ChicagoWiz recently posted about him as well.  Nice.
Posted by Nick at 7:46 PM 1 comment:

Thoughts on Business from the Spiderweb

I've linked to Jeff Vogel before, his blog is firmly on My Daily Read, and his most recent post proves that he and I share sensibilities.  In case you aren't familiar, he is the owner/lead-designer for Spiderweb Software, an indie computer gaming company that specializes in one person rpg games.

In his most recent post, he discusses piracy in computer gaming.  It is a very interesting read.  While the parallels are not perfect, I think that there is enough overlap to be of interest to those who play and/or write for the paper rpg hobby--especially people who consume or produce (as I do) pdf products.  Not only is his article interesting, but the comments (167 as of this moment) demonstrate the full spectrum of opinion on the issue.

Not directly related to his post, but something that came up in the comments was a discussion of pricing for computer games.  I believe that the points raised on software pricing are equally applicable to pdf pricing--that, in general, for a product that costs the same to produce one copy as it does to produce a million copies (anything digital)--a lower price will equate to higher sales, which should lead to more income for the creator.

While that sentence is a gross oversimplification and the topic deserves a lot more indepth discussion, I think that it mostly holds true.  I've been thinking about it a lot over the last several months, and will post a longer explanation of why I believe this to be the case in the coming days.  If anyone has thoughts one way or another, I'm all ears (for the time being).
Posted by Nick at 11:41 PM No comments: