I'll take a stab at it

So lot's of people have been posting 'One-Hour' Dungeons.  Dungeons that they sat down and drew in one hour.

And I decided that I would take a stab at it.  After all, I love maps, right?

So I gathered all of my supplies: a black Pilot G-1 0.7mm gel pen, a Fine Point black Sharpie, a straight edge, and a sheet of graph paper.  I had (so I thought) set aside one hour of time in which to draw.  Conditions were perfect.

Conditions were perfect.  (Inside joke--anyone know 'Flight of the Concordes'?)

That is, except for the sleeping baby in the other room.  But she was going to sleep for a lot longer than the one hour that I needed, right?

I sat down to start and this is what I came up with in 43 minutes. 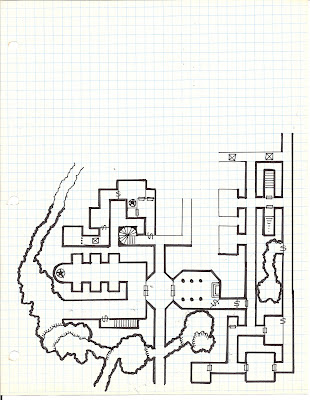 (Why did I stop at 43 minutes?  Well, the sleeping baby woke up and started to cry.  Stop, calm the baby, scan the above picture, and put it away.  I put it away, because I felt that it would be inappropriate to look at it until I was ready to finish it.  (It's a one-hour dungeon isn't it?)  Several hours later, I pull it out and draw for the last 17 minutes.)

Here is the finished dungeon: 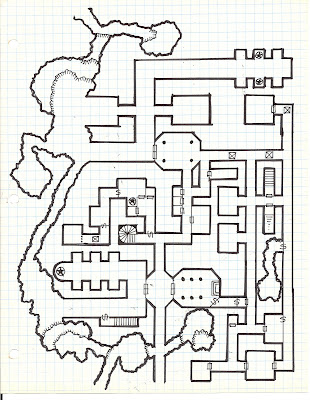 Overall, I gotta say that I am happy with it.  I really like how it looks visually--aesthetically.  It's also a lot better than I thought that it would turn out considering it is all in ink--no way to make changes, erase, or revise.  Definitely not the normal way to draw a dungeon.  From a dungeon design standpoint, however, I don't really think that it is that good.  I don't particularly like the layout of it all that much.  And frankly, I think that the ample use of caverns was a cop-out.  They are much easier (for me) to draw when hurrying.

One last thought.  In this case, I didn't really have an idea of a 'backstory' for the dungeon.  I just sat down and started drawing, stream of consciousness.  I wonder if it would have turned out any differently if I had any ideas about it before I started.  Something to think about for in the future.
Posted by Nick at 5:48 PM