Jeff Rients, who looks like this and who writes this and who really loves this guy, has been running a three part series on monsters that were considered but did not make it into the Fiend Folio, that incredible monster bestiary from UK TSR back in the early days.  You can read them in Part 1, Part 2, and Part 3.

I, for one, fall on the side of those gamers who love the FF.  I think that it is a useful work, although even I admit that some of the creatures therein leave a little to be desired.  I think the reason that I like the book so much is due to the fact that there are some "classics" in it--some monsters that I couldn't do without, those that just scream 'D&D' at me.  I admit that there are several who have no place in D&D, but the ones that do, really, really do.  The other aspect of the FF that I really like is the art.  The artists who did the illustrations for the FF definitely had their own style, and it is a style that I very much enjoy.  That is why I have immensely enjoyed Jeff's series--more fantastic illustrations in that style.  (Since they never did make it into an official product, I may take them for my personal use,)

At the end of his Part 2, Jeff makes the comment, "Tomorrow I'll share one more load of monsters the editors slighted to include crabmen."  I realize that Jeff isn't the only person in the gaming world who can't find time for the crab man.  Perhaps I am unique, but (and here is the crux of this post) I rather like crabmen.  I think that they definitely have a place in D&D.

First, I must point out that someone must have really liked them.  I know that because not only did they receive a 1/3 page write-up and illustration (shown below), they also received a full page illustration just before the write-up (further below). 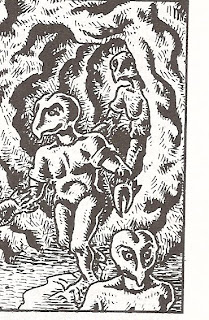 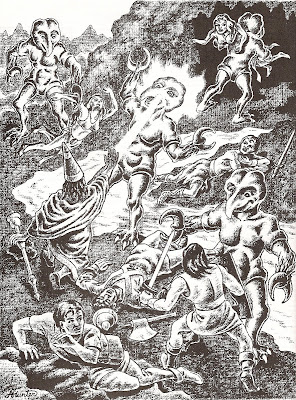 To be frank, while I did just say that I really enjoyed the illustrations in the FF, this full page of the crab men just really doesn't do it for me.  Their heads are a little too big.  And, speaking of their heads, not very crab- like.  I have wondered if that is why people don't have much love for them.  Is it because they look, well... cheesy?

Perhaps a better crab man would have been centaur-like.  Perhaps similar to the drider of the MM2--you know, the half-drow, half spider creature.  Perhaps a human torso on a crab's eight legs may have worked better for people?  Throw in some pincers and crab antennae, and it sounds like a winner to me!

I guess another reason that I like them is that I always wanted to run an aquatic campaign, or at least one that features exploration of the deep sea depths.  In the MM, you have giant crabs, giant crayfish, dragon turtles, eels, aquatic elves, eyes of the deep (underwater beholder, mmmmm), hippocampus (underwater horse), ixitxachitl (I can't pronounce it, but intelligent, evil rays--how sweet are they?), lampreys (underwater leaches), locathah, mermen, morkoth (crazy, hypnotic underwater demon-thingies), nixies, nymphs, giant octopi, portugese men-o-war, other rays, sahuagin (the standard in underwater evil: shark men), sea hags, giant sea horses, sea lions, sharks (of course), sea snakes, giant squid, strangle weed, tritons, giant sea turtles, and whales.  Of the intelligent races, you have aquatic elves, ixitxachitl, locathah, mermen, nixies, and sahaguin.  That list doesn't include the MM2 or the other aquatic creatures/races in the FF itself (Kuo-toa, I'm looking at you.).  I definitely think that there is room for crabmen.  I would go so far as to say that they are required.

The final reason that I really like them is that I love hanging out at the ocean, playing in the surf, building sand castles.  Where is the danger?  Sahaguin, you say.  But, they can get old after awhile--just like drow have been over-exposed to the point of no longer feeling very special.  There needs to be some other hazards near the ocean.  Crabmen!

I imagine crabmen living in massive sand castles.  Obviously, the best are the drippy kind:

Mazelike tunnels burrowed through that thing rising up at the edge of a shallow sea.  Adventuring goodness!

Perhaps I am alone in my love of the crabman, although I believe that there are others out there who share my feelings--even if they are embarrassed to admit it.
Posted by Nick at 2:39 PM