Be a Tourist and be Inspired

As I stated previously, I am an American living in the UK and trying to take full advantage of all of the tourist possibilities out there--here and on the continent.  It helps that my wife and kids are into castles and ruins and other old things--all perfect for inspiration for fantasy roleplaying.

We have a tendency to spend the money on the 'official guidebook' at every tourist destination that we visit.  One of the things that I love about most of the guidebooks is the maps that they contain.  There is so much in the real world that can be translated directly to a D&D setting.  Occasionally, I'm going to post here some of the maps that I've come across in my touring.  These will be maps that I found particularly inspiring or maps of places that were inspiring, even if the map itself might not have been.

The first for today was both.  The map could come right out of an adventure module and wandering the halls shown on the map was a real treat.  The map is of Diocletian's Palace--a Roman Emperor who build a palace in Split, Croatia.  Fantastic place to visit--highly recommended.  Below the map is the text that was associated with it. 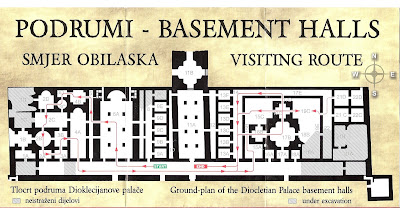 The next item for today is the map of the National Gallery in London.  The Gallery itself was a nice afternoon, basically lots of rooms holding lots of old paintings.  Don't get me wrong, some of the paintings were incredible, but the building itself didn't have the same inspirational quality that Diocletian's Palace did.  But what I did like was the map itself.  Here it is: 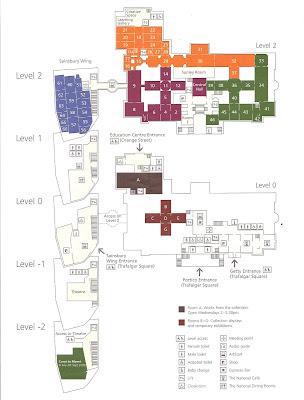 I have a lot of these things lying around.  I'll probably pull some more and post them.  Hopefully, they'll be as inspirational to you as they have been to me.
Posted by Nick at 7:31 AM