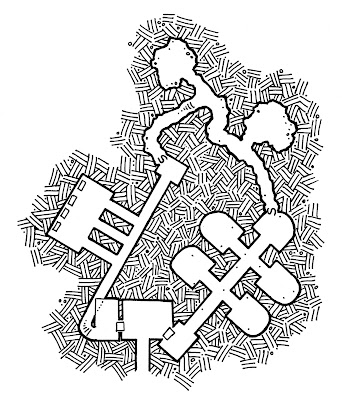 Clavid Daen was a warrior who fought as part of the Mailed Fist, whose greatest exploits included vanquishing the Orcrish Overking and breaking the back of his mightiest army and ridding the Keep at Swarren Ford of the foul wyrm Groxodryzaksis.

The common stories say that he died while in battle against the archmage Craeg Na'Raenic the Vile.  And there are a great many people (who should know better than that) that will argue that truth with every breath that they have.  What the common man does not realize, however, is that Daen had actually joined with Craeg Na'Raenic and was fighting against his former compatriots when he was struck down by Garrick the Tall.

Even before that battle reached its end, the body of Clavid Daen was taken from the battlefield.  He was buried in a small crypt in the Dunn Hills.  Those who know the truth about his final hours stay away from the crypt.  Those, however, foolish enough to believe the tales of Daen's heroism continue to pilgrimage to the outer shrine and pay their respects.  Many of them have paid with their lives.
Posted by Nick at 6:30 AM