I've really enjoyed my map drawings.  This might become a regular feature here.  I present to you The Columns: 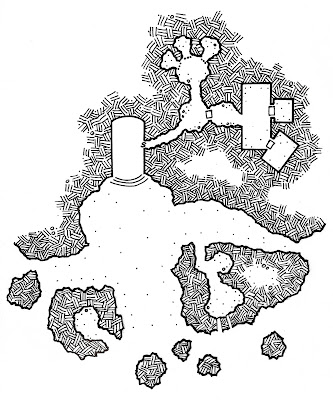 The residents of Hargrish Town have long argued whether or not the natural stone columns beneath the granite overhang at Fendinil Rock actually support it.  Whether they do or not would probably best be answered by a dwarf, but the few who have passed through Hargrish recently have shown no interest in settling the argument--perhaps because the rants and counter-rants that can be heard at the Sipping Sow are a great source of amusement for them.

In years past, the semi-sheltered area beneath the Rock served as a way-station for travelers moving between Hargrish and the larger towns to the west.  Recently, however, travelers have reported being driven from the Columns by unsavory men.  Some go so far as to say that bandits have taken up residence in the ancient shrine carved into the stone.
Posted by Nick at 10:00 AM