Did I have something better to do?  Better might not be the right word, but I definitely had other things that I should have done.  But, for whatever reason, the urge to map arose within me.  Too lazy to do something on the computer, I grabbed an 8.5x11" piece of white printer paper and a trusty black gel pen and began doodling.

48 minutes later, I had completed this: 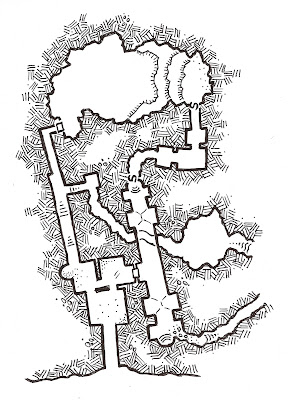 It looks (to me) a lot like Dyson's work--a style that I haven't ever really tried before.  I guess that I shouldn't be surprised: His maps inspire me more than just about anything else that I'm seeing out there right now.

Hopefully, he won't come after me for attempting to use his style.

If I wanted to really emulate him, I would write a little backstory for the map.  Unfortunately, too tired for now.  Perhaps a kind reader will supply me with one in the comments.