Inspiration for Me: City Ruins

One of my reasons for maintaining a blog is to build an online library of things that inspire me, creatively or otherwise.

I came across something in my internet wanderings, and I don't want to lose it.

The topic is City Ruins, and the source of the inspiration is the Hill Cantons.  Thank you, ckutalik, for this blog post that is 3+ years old.  You have inspired me.

The inspiration comes from a quote in that blog post about the ancient city of Constantinople.  Good stuff.

Now that I stop and think about it, fantastic city ruins have occupied a large plot of mental real estate in my mind lately.  Three different ruined cities actually.

#1: The first is the city of Tharrenton Deep, an ancient dwarven stronghold in a piece of fiction that I am writing.  Megadungeon exploration in fiction.  Enough said, for now.

#2: The second city is that which appears in the classic AD&D module, Dwellers of the Forbidden City.  I, like many people before me, absolutely adore the map of the city that appears on the inside cover of the module.  Some have said that that map is the first example of an isometric map to appear in a TSR module.  Don't know if true or not, but it's a fantastic map.

Recently, I had a crazy idea.  Why not create a map of the city in a 10'/square scale instead of the (I believe) 50'/square scale that it originally appears.  I figured it out a while ago: Assuming 5 squares/inch graph paper, the map would come in at about four feet by four feet.  You could map the interiors of all the buildings shown on the original.  You (meaning me, if I actually attempted it) could do a second map (or mutliple maps)(same size) that depicts all of the upper levels of those buildings.  Do another map that shows the sewer system, basements, and catacombs, and perhaps one final map that shows a deeper level.  What you end up with is 5+ maps, sized four feet by four feet, that depict the Forbidden City in typical dungeon level detail.

FANTASTIC!  I even considered going one step further: Make it a kickstarter project and see if people would actually back such a thing.  Because, honestly, without some kind of forcing factor, I don't see myself being able to plod through all that effort.

#3: The third city is a ruined city located in a cavern that I hint at in Locales, Volume 1, the first product that I released at RPGnow.com many years ago.  I was on the website looking at the product and re-read a review that said, "The maps for the Caverns are wonderful, creating an entire underground complex ready for adventuring. The only complaint I have for these maps is there is no map for the ruined city."  (Emphasis added.)

I guess I just have a thing for ruined cities.

And here's the map from Locales, Volume 1 that shows (in very little detail) the ruined city: 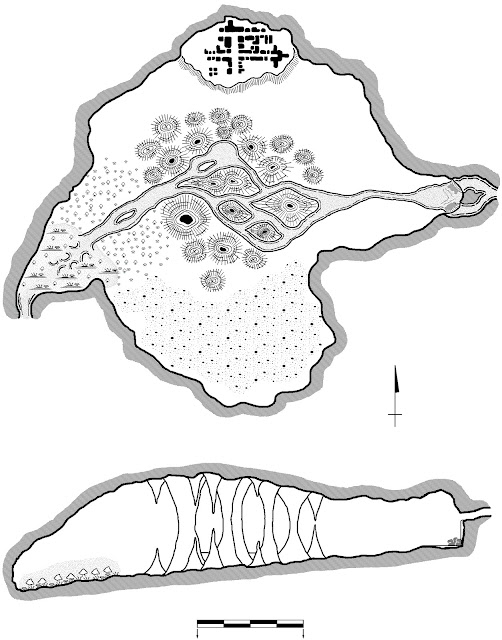