Megadungeon Monday: The Pool of Mirrors 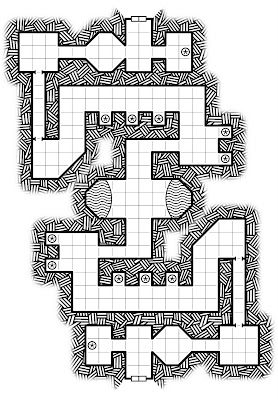 The player characters would enter this area through the double doors at the bottom of the map.  They will work their way through these chambers, what I call the Foyer, the Small Shrine, the Square Hall, the Arched Passageway, the Hall of Statues, to finally pass by the Pool's Sentinels before coming to the main room at the center of the complex where they will find the two pools.  There is nothing to indicate that these pools are special or magical in any way.  Near the ceiling on the wall behind each pool are openings through which flows a constant stream of clear, cool water.  The water in the pools is clean and drinkable and drains through several small holes in each.

When the players continue heading to the "north" and turn the corner to the right, they are magically teleported to the identical spot in the complex to the "south" walking to the "south".  They will not be aware of this and will continue on their way until they work their way through all of the rooms through which they just passed.  Obviously, if they had left any sign of their passing, they will quickly realize what has happened to them.

There is nothing that the players can do to prevent this teleportation.  No form of magic or mechanical device will prevent it as they walk "north".  The only way to block the teleportation effect is to step into the waters of either of the pools.  Any character who stands in the pools (which are about 18 inches deep) and soaks their feet and footware will be able to walk to the "north" without the teleportation from occurring.  [Note that flying through the passageway will not prevent the teleportation either.]

The characters may even then become confused, because as they venture "north" they will find the complex of rooms ahead identical in makeup and contents as that through which they have already passed.  It is quite possible that they will believe that they have been subjected to the teleportation yet again.  It is only after they make their way through the complex and then through the double doors at the end will they realize that they have made it to someplace new.

How you as the DM want to use the Pool of Mirrors is up to you.  Obviously, it would trick the lesser intelligent beings in a dungeon and so might serve to protect a specific area from wandering monsters.  It might just guard the chambers of a powerful wizard.  Or perhaps it is just one way of limiting traffic into a specific area of your dungeon.
Posted by Nick at 5:27 AM